How to Make Dream Catcher Earrings

Dream catchers are one of the most fascinating traditions of the Native Americans. The Ojibwa and Lakota tribes believed that the dream catcher could trap bad dreams in its web, whilst positive dreams were let through the hole in the centre of the dream catcher and were thought to glide down the feathers to the person sleeping underneath it.

Original dream catchers were made of a willow hoop and a net. The round shape of the dream catcher represents the journey of the sun and the moon across the sky. Beads can be strung between the weaving and were thought to represent the four directions: north, south, east and west.

Not only are dream catchers still a popular piece of decoration in children’s bedrooms today, they’re also surprisingly easy to make. We’ll show you below how to make beaded dream catcher earrings. 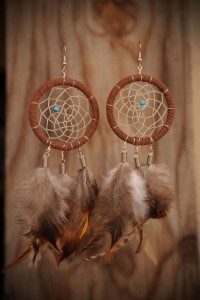 – Suede lacing (to wrap around the wire)

– Waxed nylon string or yarn (10x the length of the hoop)